A Garden Oasis in The Lobby 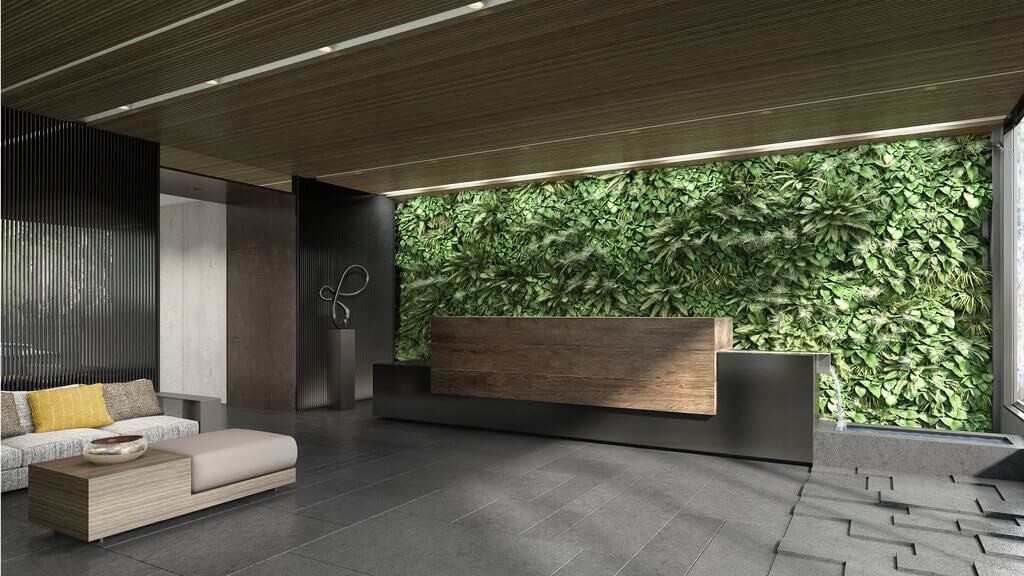 The Original Article Published On The New York Times

Beginning next month, residents coming home to the new 392-unit rental building at 525 West 52nd Street will be welcomed by a lobby with an interior garden as its centerpiece. Enclosed in glass on three sides, like some giant terrarium, but open to the sky, the inaccessible landscape will sprout with ferns, horsetail and magnolia trees.

“It’s reframing landscape almost as art,” said David Seiter, the founding principal and design director of Future Green Studio, the landscape design firm creating the garden. “Our cities are getting denser, and we’re trying to find unique ways of weaving the wild back into our built environment.”

Indeed, Future Green Studio has developed a specialty in coaxing plants to grow in unlikely places — in pockets of a sculptural courtyard wall at 520 West 28th Street, for example, and across an indoor green wall at 60 White Street.

“We’re often dealing with slivers of landscape,” Mr. Seiter said, noting that bringing greenery indoors as an artlike focal point in building lobbies is emerging as “a huge trend.”

“It becomes a big visual feature that lends a softness that makes the space much more human,” said Adrienne Albert, the chief executive of the Marketing Directors, which is leading marketing and leasing at 525 West 52nd Street. “It started with rooftop decks that went from a few plants in pots to really beautiful installations,” she said, “including green walls and sculptural areas” — elements that are now moving indoors.

At Austin Nichols House, at 184 Kent Avenue in Williamsburg, Brooklyn, the lobby has an enormous green wall by Plant Wall Design measuring roughly 500 square feet and holding some 3,500 plants. “It feels warm and inviting, it produces oxygen and it sets up the experience of the courtyards” inside the building, said Morris Adjmi, the architect overseeing the condo conversion project. “It’s also a very graphic planting, with a range of greens in a wavelike pattern.”

Although they may look complex, green walls are relatively easy to maintain, said Ismael Leyva, an architect who is putting a 23-foot-tall vertical garden by Parker and EcoWalls in a lobby he designed for 507 West Chelsea. “They’re basically self-sufficient, because they have an irrigation system,” he said, and work with natural light or grow lights. “You can just replace some of the trays if you need to.”

Sometimes these plantings are combined with water features to create the feeling of an oasis. At 252 East 57th Street, residents traverse a walkway between babbling pools of water to enter the lobby, designed by Skidmore, Owings & Merrill, Daniel Romualdez and Mathews Nielsen Landscape Architects, before encountering a floor-to-ceiling green wall and a long brass table brimming with plants.

“We tried to have tactile, auditory and visual components, all tied to nature, to provide therapy for the senses,” said Julia Hodgson, a project executive at World Wide Group, which is developing the building with Rose Associates. “It’s probably becoming common for a reason: People respond well to having nature inserted into their home environments.”

At Citizen360 at 360 East 89th Street, there are plans for a green wall by Town & Gardens behind a burnished-steel and oak reception desk, with an integrated scupper that splashes water into a pool. On the floor, stepped slabs of limestone will create the feeling of a rock garden.

“We’re working with biophilia, which is the positive effect of nature on all living things,” said Clodagh, the interior designer, noting that she was inspired by the pocket-size Paley Park on East 53rd Street. “You’re in the concrete jungle, and all of a sudden you see water and greenery and get this splash of wellness.”

By using a similar idea at Citizen360, she said, “we want our lobby to give you a welcome hug when you walk in.”